Quick Summary of Why Is There An Increase In Food Allergies?
1. The Hygiene Hypothesis
2. The Obesity Theory
3. The Vitamin D Deficiency Theory
4. The Genetic Theory
5. The Climate Change Theory
6. The Processed Foods Theory
7. The Pollution Theory

Though there are many theories as to why, one thing is certain: there has been a significant increase in food allergies in the last twenty years. A VERY significant increase. Research shows that since 1997 the number of people with food allergies has increased over 50%. It’s estimated that among U.S. children, 1 in 13 kids have at least one food-related allergy. Given the average student classroom size today, that’s two kids per class.

Not only that, but the majority of all people with food allergies today have multiple allergens. Some children have three or more food allergies. This is a modern development when compared to food allergy data from the past.

The common types of foods that people are allergic to have remained mostly the same over the years. They are shellfish, fish, wheat, soy, tree notes, peanuts, eggs, and milk (see this article for more info). Approximately 90% of all food allergies are one of those eight.

So why is there an increase in food allergies? The truth is that we don’t yet know, at least not for sure. There has been a lot of research done on the subject with no single definitive answer. Many theories exist. This article presents a brief explanation of the main ones.

There are 7 major theories answering the question why is there an increase in food allergies?

We’ve put this first on the list because it’s widely considered the most compelling reason. It’s also the only theory with an official name: The Hygiene Hypothesis.

Simply put, our modern generations are too clean. In developed countries, there is a better water supply, better sanitation, and better hygiene in general. We now have fewer infections among both children and adults. This has resulted in an increase in allergies.

How is that, you ask?

Well, let’s start with explaining microbes. Microbes (or microorganisms) are extremely small organisms that exist all around us and inside us. Examples include bacteria, fungi, algae, protozoa, and viruses. Many microbes cause diseases like the flu or measles. But they also are beneficial in many ways – even necessary. They boost our immune system, protect us from autoimmune disease, detoxify our bodies, regulate body weight, and more.

But with all the antibacterial soaps, antibiotics, acid-reducing stomach meds, and hand sanitizers, we’re eliminating our internal microbes. We’re also decreasing the amount microbes that we would otherwise be exposed to. This has altered our immune systems enough that they often get confused as to what or what not to attack.

Essentially, we’re being too clean. That’s the hygiene hypothesis.

The Hygiene Hypothesis and Children

When infectious agents are not exposed to a child during their early years, it deprives their immune system of important information. This is what is meant above when we mentioned that immune systems get “confused.” It can’t tell the difference between certain food proteins and invading germs. This is what causes some of the common symptoms of allergies.

Allergy-related studies have been done on children reared on farms. The results? They have fewer allergies! Experts theorize that growing up on a farm exposes children to more germs – or microbes. Over time, exposure to these organisms stimulates the immune system. This reduces allergic inflammation because the body is better educated as to what’s harmful and what isn’t.

Many asthmatic people (particularly children) are obese. And a high percentage of those have food allergies. This is pertinent because allergies usually trigger adult-onset asthma. So it’s suspected that obesity leads to food allergies which leads to asthma.

In summary, obesity rates are rising consistently in the U.S. And obesity is linked to the development of food allergies and asthma.

Vitamin D is extremely important to the body. It’s essential for bone growth, calcium absorption, immune system development, and a lot more. Deficiencies have been linked to weight gain, depression, heart disease, some forms of cancer, and – you guessed it – food allergies.

Vitamin D is so important, in fact, that the human body produces it itself. The thing is, the skin needs to be exposed to sunlight in order to do so. And this where a possible answer to why is there an increase in food allergies comes in. Studies have shown that people with Vitamin D deficiencies are much more sensitive to common food allergens.

Also, it is believed that in this technological age, children spend a lot less time outdoors compared to previous generations. This means their bodies are producing a lot less Vitamin D naturally.

There’s lots of information online about food allergies being hereditary. None of it is decisive, however. No conclusive evidence has been formed that a peanut allergy, for instance, can be foreseeably passed down from mother to son. It’s certainly possible. But from what we know as of now, it doesn’t happen on any kind of regular or predictable basis.

This theory purports that due to global warming, the plant’s growing seasons are becoming longer. As a result, allergen and pollen counts are increasing causing more allergic reactions.

It’s often cited that the hottest decade ever was the 2000s. A resulting fear is that the U.S. could experience an annual temperature rise of 10℉ in the near future. These temperature shifts would render plants, in general, more immunogenic (prone to stimulate the immune system). All of this does and would continue to increase food allergy development.

Western diets have gone way downhill in recent decades. Processed foods are increasingly popular. They taste good but they also cause a multitude of health problems. Some evidence points to a link between the advent of processed foods and the spike in food allergies.

Ever heard of an AGE, or advanced glycation end? It’s a sugar-based molecule that’s undergone glycation. Glycation is when you heat up a sugar molecule causing it to bind to fat or protein.

Well, processed foods have a lot of these AGEs. The more junk food you eat, the more AGEs form under your skin. Studies show that a high AGE count is commonly found in children with food allergies.

Kids are known to eat a lot of junk food. So it very well may be that eating processed foods on a regular basis increases your chance of developing food allergies.

There’s quite a bit of evidence to suggest that food allergies and pollution are connected. The main one being that people living in highly developed countries are more likely to have food allergies than those living in third world countries. An urban, more modern setting seems to produce more allergic people.

Diesel exhaust, on the other hand, is suspected to cause and promote allergic reaction. This is assuming that the person is exposed to it regularly.

Tobacco smoke is the number one culprit here. People exposed to it regularly are at higher risk for asthma and allergic sensitization. The properties of smoke bring out and/or enhance allergic reactions in the body. Other respiratory illnesses show up at a higher rate among smokers. Conditions such as chronic coughing and bronchitis.

Obviously, children who grow up with smoking parents are more likely to develop food allergies. This includes unborn children. It is estimated that more than 20% of pregnant mothers smoke. And of those who don’t, more than 35% of them live with a smoker. These children have an extremely high probability of having food allergies.

These theories may or may not be true, but it’s more than likely that most or all of them play a role. Why is there an increase in food allergies? As more research is conducted, it’s likely that we’ll get more definitive answers eventually. 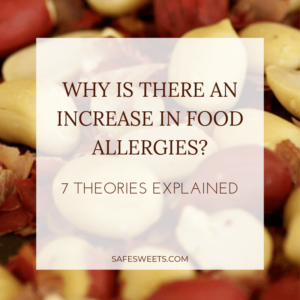 Why Is There An Increase In Food Allergies?

Safe Sweets is a US-based company that offers allergy-free and allergy-friendly chocolates. Many of the products offered by Safe Sweets have zero allergic ingredients, which means that customers with a history of food allergy can buy its products without hesitation. And because their facility is 100% nut-free and dairy-free, there is no chance of cross-contamination from shared equipment, utensils, or the like. If you are looking for an allergy-free or allergy-friendly chocolate option for you or your children, visit www.safesweets.com today for an amazing line of delicious, allergy-safe products.