close
Pretzel Bark,Rice Crisp, and Quinoa are back in stock!!

Before we get into what happens when you have Celiac Disease, let’s answer two important questions so we’re all on the same page.

What is Celiac Disease?

It’s an autoimmune disorder that directly affects the small intestine. People with this condition can’t digest gluten. When they do eat gluten, the lower intestine becomes inflamed which can lead to permanent intestinal lining damage. More specifically, the villi (nutrient-absorbing threads that line the stomach) become damaged. The body then has trouble absorbing basic nutrients.

Note: the official spelling of the disease is Coeliac, but the alternate spelling, Celiac, is wholly acceptable even in medical circles.

It’s a term used to describe all the proteins in wheat. It has a few different purposes, the primary one being to assist foods with maintaining their shape. Gluten is in a lot of common foods. This is because it’s found in all varieties of wheat (graham, farina, spelt, semolina, emmer, durum, etc.) as well as in triticale, barley, and rye. So any food that includes something from that list has gluten.

Let’s begin with the symptoms:

What Are the Symptoms of Celiac Disease?

Other symptoms that would likely require a doctor’s diagnosis include depression, infertility, anemia (lack of iron in the blood), stunted growth, abdominal distention (internal swelling), osteoporosis (brittle bones caused by the inability to absorb Vitamin D and calcium), and any seemingly or otherwise unexplainable nutritional deficiency.

All of these can be what happens when you have Celiac Disease.

How is Celiac Disease Different From Gluten Intolerance?

Non-Celiac gluten sensitivity (also called gluten intolerance or wheat intolerance) is not categorized as a disease. Reactions are not autoimmune responses. It’s not as serious a condition as Celiac even though the symptoms are similar. The degree of non-Celiac sensitivity varies from person to person.

Can You All of the Sudden Have Celiac Disease?

Not necessarily, though to some people, it may seem spontaneous. This is because many people with this condition have inherited the gene. For these people, Celiac can be developed over time or triggered into activity.

Triggers have been known to include extensive consumption of gluten, trauma, stress, gastrointestinal infections, prolonged use of Ibuprofen (and similar medications), the use of Accutane, antibiotic use, menopause, illness, and pregnancy. Triggered Celiac has also been known to be a post-side effect of invasive surgery.

Data shows that Celiac has no apparent age discrimination. People of all ages can have the condition. Though approximately 1% of the U.S. population has Celiac, it’s estimated that over 80% of those are undiagnosed. Many people don’t know they have it.

How Do You Diagnose Celiac Disease?

Because of the wide symptom disparity associated with this condition, it’s often difficult to diagnose in its early stages. The symptoms of Celiac are shared by countless other illnesses. If you think you or someone you know may be showing the signs, keep an eye on it. See a doctor to confirm or rule out a positive diagnosis.

Of all the symptoms associated with Celiac, dermatitis herpetiformis is the most common. It’s characterized by blisters and itching. If these symptoms show themselves without an obvious reason, consider getting tested. Official tests for Celiac Disease can involve blood tests, tissue biopsies (of the small intestine), and sometimes genetic testing.

Recent studies estimate that somewhere around 30% of the US population carries the genes necessary to develop Celiac. However, approximately 1% of those people ever develop it.

Also, if you have an autoimmune disease other than Celiac, you should get tested. Positive Celiac tests are much more common among these people. Around 10% of folks with Type 1 Diabetes test positive for Celiac.

A Final Thought on Getting Diagnosed

It’s much easier for an adult to adjust to a gluten-free lifestyle compared to a child. If you’re a parent and you see some of these signs that we’ve mentioned popping up, get your child tested. A kid who suddenly can’t eat hot dogs, French fries, macaroni and cheese, and various candies has much more heartache ahead of him than an adult does.

Anything with gluten. Obviously wheat, rye, and barley are on the blacklist. Some other common culprits include beer, croutons, malt, soy sauce, teriyaki sauce, cereal, crackers, pasta, and salad dressings.

Many non-food items contain gluten as well. Some of those include toothpaste, mouthwash, play-doh, lip balm, and lipstick. Many vitamins, supplements, and medications also contain gluten.

What Foods Can You Eat If You Have Celiac Disease?

People with Celiac should make sure they’re getting healthy amounts of iron, vitamin D, calcium, B vitamins, and zinc. If you’re not getting these from foods in your regular rotation, consider capsules.

Since Celiac folks can’t eat almost all forms of pasta, alternatives will have to do. But don’t worry! There are some delicious pasta replacements. Beans, wild rice, brown rice, buckwheat, and potatoes are all worthy substitutes.

What snacks can you give your child that doesn’t contain gluten? Potato chips, yogurt, fresh fruit, dried fruit, raisins, and peanuts are some popular choices.

How Serious is Celiac Disease?

The symptoms range from mild (fatigue, gas) to severe (infertility, osteoporosis). If the symptoms of the disease reveal themselves and treatment is ignored, then it’s definitely serious. There’s no reason that what happens when you have Celiac Disease needs to be extreme.

If gluten is immediately eliminated from your diet, you’ll be fine. Quality of life is not altered much other than a food selection inconvenience.

Can Celiac Disease Kill You?

As already mentioned, if Celiac goes untreated for a prolonged period of time than yes. But that is the case with most diseases. Celiac has a clear cure: don’t eat gluten. Because of this, fatality numbers for it are very, very low. Very few people have died from Celiac Disease.

How Do You Treat Celiac Disease?

There are no treatments available at this point in time other than simply staying away from gluten. The good news is that this “treatment” has close to a 100% success rate.

One positive development is that general awareness of Celiac Disease has increased in recent years as more people have been diagnosed. The majority of restaurants now post gluten warnings on their menus. Many offer gluten-free entree alternatives. Employees are typically trained to effectively answer gluten-free questions from customers. Alternative gluten-free choices are becoming more and more common in restaurants and supermarkets.

Many people who live with Celiac have reported comparable experiences in their beginning stages of diagnosis. Namely, they were the first ones to bring it up to their doctors and not the other way around. This piece of information is worth including in this article so you can be proactive. Take the initiative and ask for a blood test if it hasn’t come up yet.

Doctors sometimes mistake what happens when you have Celiac Disease for something else. Not always, but it’s known to happen somewhat often.

Also, if you have children with Celiac Disease, make sure to communicate that to the school’s administrative staff. You’ll more than likely be met with positive support. Public and private school systems are well aware of various food allergies and similar conditions in children. They almost always provide alternative cafeteria choices for those who can’t eat certain foods.

Many kids have diabetes, or are lactose intolerant, or can’t eat gluten. Your child will almost certainly not be the only one in the school with dietary restrictions. If your child’s classroom is holding a party, find out what food will be served. That way you can send your child with safe foods.

Thank you for reading What Happens When You Have Celiac Disease. Check our Resources page often for new, informative content. 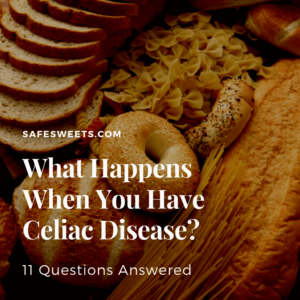 Safe Sweets is a US based company that offers allergy free and allergy friendly chocolates. Many of the products offered by Safe Sweets have zero allergic ingredients, which means that customers with a history of food allergy can buy its products without hesitation. And because their facility is 100% nut free and dairy free, there is no chance of cross-contamination from shared equipment, utensils, or the like. If you are looking for an allergy free or allergy friendly chocolate option for you or your children, visit www.safesweets.com today for an amazing line of delicious, allergy safe products.