You’ve probably heard the word kosher before but may not know what it means exactly or how it’s related to the business of allergen-free chocolate. So, what does it mean to live a kosher lifestyle? The answer to that question and many other kosher-related ones are addressed below.

What Does Kosher Mean?

Kosher is the anglicized version of the Hebrew word kashér, which is translated to mean “pure, proper, or suitable for consumption.” The more complete and modern definition is “food that satisfies the requirements of Jewish law in the way it is sold, cooked, or eaten.”

Inside the Torah (Jewish sacred text) are laws that instruct believers as to what constitutes a kosher diet. These laws are collectively called kashrut. Oral tradition has passed down the proper way to apply these dietary instructions. The answer to the question what does it mean to live a kosher lifestyle has changed very little through the generations.

Kosher guidelines are strict. They outline more than just which foods can and cannot be eaten. Foods must be prepared, processed, and produced in certain ways in order to be considered kosher.

How Do You Know If A Food Is Kosher?

What is and what is not considered kosher revolves around three main categories: meat, dairy, and pareve. Don’t worry. If you’re not familiar with the word pareve, we’ll get to that shortly. There are rules against the pairing of certain foods as well.

In the world of kosher foods (meaning ones that are okay to eat), meat refers to mammals or fowl. This includes not just the meat from these animals. It also includes any product that is derived from them. For example, broth or bones. (Some people live by a more rigorous framework of allowed meats. This is detailed in the What Animals Are Kosher? section of the article.)

Kosher dairy products are similar to what you would assume; yogurt, butter, cheese, and milk.

Pareve, pronounced “PAR-eh-vuh”, refers to non-dairy and non-meat foods. Examples include anything plant-based, eggs, and fish. Also, everything we make at SafeSweets.com is in the pareve category.

What Are The Rules Of Being Kosher?

So what does it mean to live a kosher lifestyle and follow all the specific rules? In addition to the approved foods listed above, there are other guidelines, as well.

Kosher tradition states that a dairy product and a meat product (as defined by kashrut) must never be served or eaten during the same meal. Any equipment used to clean, prepare, or process the dairy and meat must be kept separate. This includes utensils and sinks.

If a person eats meat, they must wait a designated period of time before eating dairy products. The approved amount of wait time varies among individual Jewish families. Somewhere between 1 and 6 hours is common. However, pareve foods require no waiting period and can be eaten with both dairy and meat. In other words, pareve items are neutral. This is assuming they haven’t been processed or prepared using the same equipment as dairy or meat.

Also, kosher law prohibits eating any meat from the hindquarters of an animal.

All creatures considered kosher must be made fit for eating by undergoing kosher slaughter. The Hebrew word for this is shechitah (pronounced shuh-hee-TAW). It is a humane and compassionate dispatching of the animal, designed to show respect to it. In addition to shechitah, the animal must also be salted to remove the blood before consumption.

What Animals Are Kosher?

What does it mean to live a kosher lifestyle where animals are concerned? Many people who follow a kosher diet live by a more intricate code than only distinguishing between mammals and non-mammals. The following guidelines are customary among Jews and others who eat only kosher foods.

Land animals is a more condensed definition of the above-mentioned mammals. According to kosher law, a land animal can be eaten if it chews its cud and has split hooves. This would include cows, deer, goats, and sheep, for example. It would not include horses, camels, cats, dogs, bears, squirrels, rabbits, and pigs. Those animals are considered non-kosher and unfit for consumption.

Kosher birds include mostly what would be considered domestic fowl. Examples include pigeons, turkeys, geese, ducks, and chickens. Non-kosher birds are mostly scavenger and predatory species. In the Torah, there are 24 bird species listed as non-kosher.

A kosher aquatic animal is one that has scales and fins. Examples include herring, carp, flounder, pike, tuna, and salmon. Examples of non-kosher sea creatures (ones that don’t have scales and fins) include crabs, shellfish, lobster, swordfish, sturgeon, and catfish. Waters mammals are also considered non-kosher. Fish and seafood are pareve, by the way.

Almost every other animal not mentioned here is considered non-kosher. For example, insects, worms, amphibians, and reptiles are not to be eaten. However, there are four species of locusts that are considered kosher in some Jewish communities. This is not a common practice, though.

What Foods Are Jews Not Allowed To Eat?

As already mentioned, Jewish communities follow kosher law as dictated by the Torah. Rabbis have the authority to clarify nuances in the law as well as make small addendums as they see fit.

Do You Have To Be Jewish To Live A Kosher Lifestyle?

No, you do not. There are many people all around the world that see health benefits to living a kosher diet and choose the lifestyle voluntarily. Though Jewish people live kosher law according to their religious doctrine, non-Jews are welcome to live it as they see fit.

What Is The Difference Between Kosher and Vegan?

What does it mean to live a kosher lifestyle compared to a vegan one? The main difference lies in what can and can’t be eaten when comparing the two. A kosher diet allows for the consumption of many different kinds of meat. A vegan diet does not allow for the consumption of any meat whatsoever. Even products that are made from or tested on animals are to be avoided as a vegan.

Vegan’s do not eat or use anything that was created by first killing an animal. This includes eggs, fish, poultry, meats, and even honey.

Vegans have no problem being kosher. Though there are some differences between the two diets, they are similar in many ways. There are no fundamentally conflicting principles between them. One can practice Judaism and abstain from animal products if they so choose.

In fact, a person who is kosher and vegan doesn’t have to worry about separating meat from dairy. Nor do they need to worry about keeping food equipment separate. There would never be a circumstance where that was necessary.

What Is The Difference Between Kosher And Halal?

Halal is an Arabic word that means permissible. It’s the term used to describe how food is to be prepared and eaten according to Islamic law. It also lays out what foods can and cannot be consumed. The Koran is where these teachings are found. This belief-based diet is quite similar, especially in purpose, to kosher law.

They both call for a precise and humane way of killing animals to be eaten. Pork is not allowed in either diet.

There are many differences. Kosher law does not prohibit drinking alcohol (beer, liquor wine). Even drugs are kosher. Halal strictly prohibits these things. Unlike kosher law, Halal allows the consumption of birds of prey, shellfish, and land animals with scales. Halal does not have any rules that require food equipment and utensils to be kept separate.

In Halal, a prayer must be said to Allah before slaughtering and again before eating. No prayers is required in kosher. Eating the whole animal, including the hindquarters, is allowed in Halal. The consumption of residual blood in meat is allowed in Halal but not in kosher. (Kosher law requires the meat be salted and removed of all blood.)

Kosher meat is acceptable in halal law, but halal meat is to those following kosher rules.

Are There Health Benefits To Eating Kosher?

There are many. For one, kosher diets lend to lower cholesterol levels. This is because foods that mix dairy (cheese) and meat tend to be very fatty and unhealthy. Examples of these foods include lasagna, pizza, cheeseburgers, and a high percentage of all fast food.

There are studies that have shown that pork contains more allergens than any other meat. High allergen intake can result in a variety of health problems. As a kosher lifestyle does not include pork, the risk for these associated health issues is lower.

So What Does Kosher Have To Do With SafeSweets.com?

All of our products are certified kosher pareve and subject to rigorous, unscheduled monitoring by our certifying authority. Everything we make is not only 100% kosher but delicious as well!

What Does It Mean To Live A Kosher Lifestyle? – Conclusion

There are countless resources on the web regarding kosher diets. A simple Google search should provide you with more than enough information if you’re looking for more. Thanks for reading What Does It Mean To Live A Kosher Lifestyle?. Contact us if you have further questions on this topic. 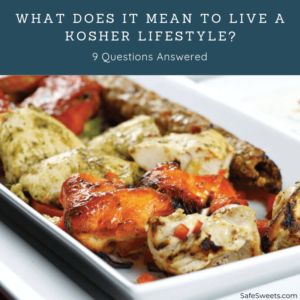 What Does It Mean To Live A Kosher Lifestyle?

Safe Sweets is a US based company that offers allergy free and allergy friendly chocolates. Many of the products offered by Safe Sweets have zero allergic ingredients, which means that customers with a history of food allergy can buy its products without hesitation. And because their facility is 100% nut free and dairy free, there is no chance of cross-contamination from shared equipment, utensils, or the like. If you are looking for an allergy free or allergy friendly chocolate option for you or your children, visit www.safesweets.com today for an amazing line of delicious, allergy safe products.