Quick Summary of Foods That Are Bad For Gut Health

Our previous article on gut health received a lot of engagement, making it clear that this topic is on a lot of your minds. Many of our readers were asking, “what are the specific foods that are bad for gut health?” We’re going to answer that question here. You’ll notice that some of the things on this list aren’t actually food, but are just as harmful – some even more so.

For detailed information on the gut itself and our microbiome, click here.

Alright. Let’s talk about foods that are bad for gut health.

These are substances added to food designed to preserve it, enhance its flavor, or alter its appearance. While some food additives are natural, most of them aren’t. Certainly, the most widely used ones aren’t. So when we say food additives, we’re referring to the unnatural ones. The majority of these substances have unusual spellings and long names. You’ve seen them listed in the ingredients of heavily processed foods.

You can be sure that putting unnatural, non-medicinal substances into your stomach is not healthy and negatively alters your microbiome. (And that’s not to say that just because they’re medicinal means they’re safe. We’ll address that later).

Excessively consuming one particular food is not healthy, and meat is no different. Eating large quantities of red meat on a regular basis reduces the number of short-chain fatty acids in your gut. These acids are extremely important as they help sustain the general community of bacteria in your gut.

People who eat red meat excessively are at higher risk of irritable bowel disease and a number of other conditions. All food types, even healthy ones, should be consumed in moderation. That goes not just for meat but for all food types.

These are chemicals (red alert!) used as sugar substitutes. They’re usually non-caloric, low-calorie, and are made to be sweeter than natural sugar. Common examples include Sweet’N Low (saccharin), Splenda (Sucralose), NutraSweet (aspartame), and Equal (also aspartame).

How healthy/unhealthy artificial sweeteners are has been a point of controversy for a long time. Decades of studies have been done to determine their effects. As gut health has become more mainstream, researchers are factoring in how these substances affect our microbiome. The results are not good. As could be expected – knowing that artificial sweeteners are chemicals – consuming them causes bacterial populations to shift.

Links have also been made to metabolism, causing it to slow down, and to glucose intolerance (a.k.a. hyperglycemia).

Consider cutting out fake sugar and using the real stuff, just in smaller amounts. New research suggests this option is better for your microbiome and for your overall health.

We don’t have to tell you that too much alcohol is not healthy. But know that alcoholism is very bad for your gut. Alcoholics are at much higher risk of liver disease as well as alcohol-induced tissue injury. The gut plays a major role here. Consistently pouring alcohol into our stomach causes major changes to bacteria levels in our gut. And none of those changes are good.

The research on carrageenan’s relationship to gut health is still in its early stages. But many experts believe that, when eaten too much, it causes gut inflammation and intestinal damage. Though carrageenan is a food additive, we gave it individual attention because it’s a natural one. It comes from seaweed and is used for stabilizing, thickening, and gelling certain foods. Lunchmeat, milk, jam, bread, ice cream, and cheese all contain carrageenan.

Toxic chemicals designed to repel or kill livings organisms are called pesticides. Food producers use them to reduce livestock losses and large crop, but they have serious harmful side effects. For many years, pesticides have been linked to a myriad of health conditions. These include skin disease, reproductive problems, genetic and neurological issues, cancer, and more recently, gut health.

Traces of pesticides can enter our bodies when we eat food that has been exposed to them. They’re commonly used on vegetables, fruit, fish, and many other traditional foods. We can also be exposed to pesticides through contaminated water and air (many pesticides are sprayed).

Again, because pesticides are chemicals, they’re not good for the gut. Tests have shown that these particular chemicals are very good at absorbing into the body. When we eat contaminated foods, our bodies have a difficult time preventing their effects. The microbiome alterations made by these substances have been linked to many auto-immune diseases, obesity, and even diabetes.

It’s worth mentioning that Roundup (the world’s most popular herbicide) has been under fire as of late. It’s main active ingredient, glysophate (a pesticide), is believed to seriously impair the growth of healthy gut bacteria. Roundup is used on wheat, corn, and sugar all over the world. Though research is still being done, results so far are not favorable.

“But don’t antibiotics cure and prevent illness?” Yes, they do. Today, however, our society has a major issue with antibiotics being over-prescribed and used excessively. The saying “better safe than sorry” is how many people see the use of antibiotics. This is unwise. Don’t forget that antibiotics are largely unnatural. They’re made in a lab which should always be a red flag, at least to an extent, where your gut is concerned.

How do antibiotics mess with your gut? Well, what are they made to do? They’re made to stop bad bacteria from multiplying by killing it. The problem is that these pills have a hard time knowing the good bacteria from the bad. When you swallow them, most antibiotics just try to bulldoze all the bacteria its path, no matter what. So it’s curing you in one sense because it’s getting the bad bacteria. But it’s harming you in another because it’s also getting the good ones. The result of this process is usually something called leaky gut.

By essentially whitewashing your gut’s bacteria, there’s a time period where your gut has to replenish it all. During that susceptible time period, most people are eating diets full of sugar because, well, that’s just what most people do. Without enough good bacteria in the gut, sugar causes an overgrowth of yeast. And overgrowth of yeast leads to damaged intestinal walls, which is called leaky gut. Read more about leaky gut here. It’s not good.

But We Often Need To Take Antibiotics. What Then?

The majority of modern health literature suggests taking a high-quality probiotic daily. According to literature, make sure to take it at least two hours after taking your antibiotics. But don’t take them together as that would cancel out the effect of the probiotic.

There are also other natural ways to rejuvenate your gut during and after antibiotic usage. Read about them here.

It’s also important to note that we can ingest antibiotics by eating certain foods. Animals are often farmed in dirty and crowded living conditions. Producers typically administer antibiotics to these animals to prevent disease, as well as to stimulate growth. When we eat products from these animals, we’re consuming traces of those antibiotics they were given. Eating organic food is a way many people avoid this.

It isn’t only foods that are bad for gut health. Certain lifestyle choices can also have a negative effect.

Studies on the relationship between stress and gut health have only recently begun. But evidence suggests there is definitely a link. We already know that stress reduces blood flow and increases body sensitivity. Some researchers say that perpetually stressed people have a much lower count of good bacteria, particularly one called Lactobacilli, as well as a much higher count of bad bacteria, particularly one called Clostridium.

Getting enough sleep is incredibly important to the human body. We’ve all experienced many of the side effects. You may have heard of something called the circadian rhythm. It’s our body’s internal clock that affects our hormones, brain, and other important body functions. It’s because of your circadian rhythm that you get sleepy at night and remain awake during the day.

Sleep deprivation throws off our circadian rhythm and is linked to heart disease, obesity, and other diseases. Recent sleep studies through the lens of gut health have shown an abundance of bad bacteria in those with poor sleeping patterns. Bacteria associated with diabetes and weight gain, in particular, seem to show up in unnaturally large amounts among these people.

The tobacco used in cigarettes is far from natural. It’s processed using thousands of chemicals, many of which are linked to cancer. Smoking causes lung cancer, strokes, heart disease, and inflicts harm on almost every organ in the body. It also does a number on your microbiome.

Studies have been done comparing the gut flora diversity of smokers and non-smokers. The guts of non-smokers were in decidedly better shape. If your goal is to have a healthier gut, smoking isn’t doing you any favors.

Among all the benefits of regular exercise, improved gut health is sometimes overlooked. Research has shown a definite positive effect in the guts of those who prioritize regular physical activity. One of the most important good bacterias, butyrate, is found in abundance in physically fit people. One particular study concluded that professional athletes, generally, have exceptionally healthy microbiomes. 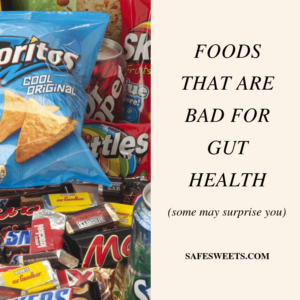 Foods That Are Bad For Gut Health

Safe Sweets is a US-based company that offers allergy-free and allergy-friendly chocolates. Many of the products offered by Safe Sweets have zero allergic ingredients, which means that customers with a history of food allergy can buy its products without hesitation. And because their facility is 100% nut-free and dairy-free, there is no chance of cross-contamination from shared equipment, utensils, or the like. If you are looking for an allergy-free or allergy-friendly chocolate option for you or your children, visit www.safesweets.com today for an amazing line of delicious, allergy-safe products.